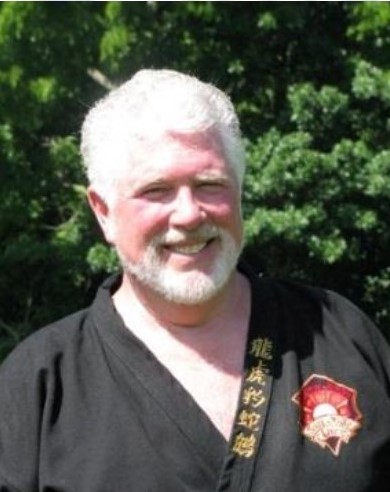 Professor Ted Sumner began his martial arts training with the Tracy Brothers in San Jose, California in November of 1963. He received extensive training as an instructor and began teaching for the Tracy’s in San Jose in October of 1967. He was awarded his Black Belt on October 11, 1968, one week before his 18th birthday.

Professor Sumner served as a Deputy Sheriff for Santa Clara County assigned to the Main Jail and later as a member of the San Jose Police Department working in Patrol, as an Undercover Narcotics Officer and on the elite SWAT Team. His Kenpo skills were well tested during years in Law Enforcement.

Professor Sumner is the author of the book “Deep Cover Cop” a true life account of his years as an Undercover Narcotics Officer. He also developed and wrote Secrets of the Kenpo Healing Arts, a distance guided instructional course in the healing arts of Kenpo. In 1988 Professor Sumner opened San Jose Kenpo where he taught as Chief Instructor until 2013 when he retired to Austin, Texas turning the school over to his top student Vance Murakami.

Grandmaster Jefferson Davis has been a part of the Tracy System family since he joined the Kirkwood studio in St. Louis, MO in 1974. Prior to Kenpo, he trained for 3 years in Judo and studied karate with Bob Yarnall.

While working on his Master’s Degree in History between 1975 and 1977, GM Davis had the good fortune to train under the great Roger Greene and his teacher, Joe Lewis.

GM Davis was an avid tournament competitor from 1974 until his retirement in 2000, winning many state, regional, national and international titles.

His teaching philosophy is simple…when students come to him to train, they are putting their lives in his hands.

GM Davis retired from the US Army Reserves as a Lieutenant Colonel in Military Intelligence and Special Operations. He holds the rank of 10th degree black belt in Kenpo under Al Tracy and the rank of 9th degree black belt in the Roger Greene Martial Arts Association. He is a Charter Member of the Kenpo International Hall of Fame and serves as a member of the Tracy’s Kenpo Senior Advisory Council. He currently teaches in Troy, IL at the studio of his top black belt, Master Bill Dalton.